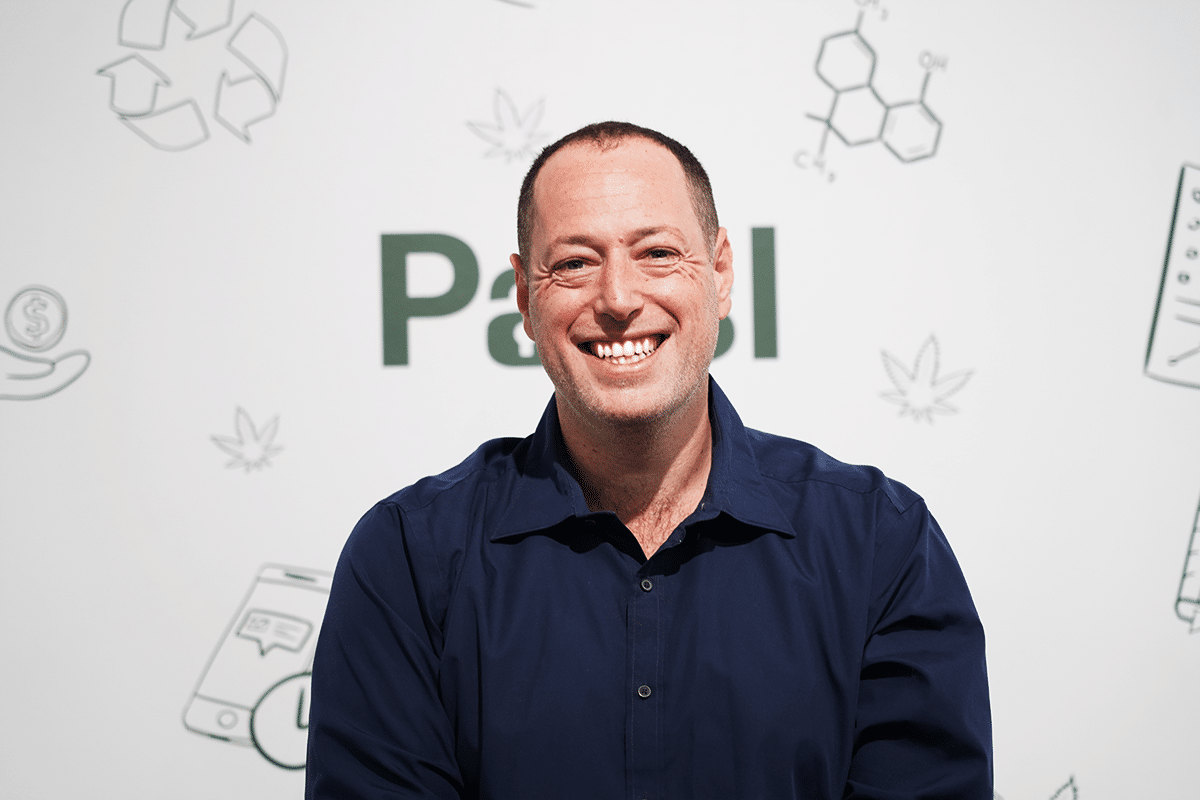 Dr. Isaac Balbin is the founder of Parsl, a new type of technology company that is helping the cannabis industry communicate effectively through the utilization of blockchain and other cutting edge technologies including IoT, AR, VR, and AI / Machine Learning.

Isaac’s inspiration for Parsl didn’t begin when he completed his Ph.D. in electrical engineering and achieved great success writing articles, winning awards, and publishing patents. It didn’t begin when he founded and sold other companies. It began when Isaac was just a teenager.

You see, at 17 years old, Isaac was diagnosed with Chronic Myeloid Leukemia.

His cancer treatment lasted for several years and was debilitating. Despite his struggles with his health, he was able to attend university, get married, and have 3 great kids. He earned his Ph.D. and developed expertise in a range of technologies including RFID, NFC, and blockchain.

A few years ago he attended an event on medicinal cannabis at the Peter Maccallum Cancer Centre which opened his eyes to cannabis as medicine. He finally saw real science and data showing why cannabis is effective as a medicine.

When he looked into the many cannabis industries around the world, he found that even in places with the most open cannabis laws, major obstacles still restrict patients’ access to legal cannabis and make business operations unduly arduous and costly.

He saw how he could use his knowledge of cutting-edge technologies to create an ideal ecosystem for the cannabis industry, making it efficient, safe, transparent, and economically optimized. That ecosystem is Parsl.

The US cannabis industry is currently a disaster of inefficiencies and miscommunications at every level. Parsl’s aim is to give the industry as a collective the tools to operate as the most intelligent and data-driven supply chain in the world. Parsl’s SmartTag technology will serve as the infrastructure that the rest of the platform is built on top of and will enable Isaac to achieve his vision for the cannabis industry.

Where did the idea for Parsl come from?

Isaac Balbin: The idea for Parsl came from me sitting and learning about the problems in the novel cannabis industry and thinking about how the technology that I’ve spent the last 10 years of my life working on could potentially work to solve some of those problems.

Earlier in my career, I’d worked on things that could solve some of the aforementioned problems. As I became aware of the problems in the industry, I began to wonder: What could my understanding of these specific technologies mean for this industry which I recently learned about? I had some connections and one thing led to another. I wrote a white paper and that’s what started the journey.

What does your typical day look like and how do you make it productive?

Isaac Balbin: We don’t have typical days. Every day is its own adventure. Even on a single day, Parsl life is a rollercoaster. We get big highs and lows and I’m very emotionally invested in the project so I feel all of those but it helps to keep that project pushing along. Because we have this higher purpose that we’re aiming for, even the problems can be framed in their proper context and it makes it a lot easier to deal with the emotions.

How do you bring ideas to life?

Isaac Balbin: We have lots of people who come up with lots of ideas at Parsl and we try to treat every idea like a rock. Someone brings their new idea, their rock, and they put it in front of the rest of the team. The rest of the team then brings out their hammer and they start smashing that rock as much as possible. Sometimes they smash that rock into dust. That rock wasn’t a good idea if we could smash it into pieces. But sometimes we finish smashing that rock and when the dust settles, what is left is a diamond. We build the Parsl platform using those diamonds.

What’s one trend that excites you?

Isaac Balbin: I see a trend of people ubiquitously becoming accepting of medicinal cannabis at a global level, no matter who they are, no matter what their peculiar fantasies that they follow happen to be – within religious circles, within non-religious circles, in remote places, in suburban places. It’s an incredible movement towards the acceptance of the benefits that cannabis can deliver medicinally.

This bottoms-up approach to medicine which hasn’t existed for many, many years is changing the way that health care will be delivered to people. I’m excited to see how that continues to evolve. I can’t wait for the day that every person has a board of doctors that are in charge of their health from birth until death and people can come in and out and all of it is recorded sensibly and they have better health outcomes.

What is one habit of yours that makes you more productive as an entrepreneur?

Isaac Balbin: I would say it’s the habit of questioning everything that I do think or say, even if I thought it was perfect the last time that I said or thought it.

What advice would you give your younger self?

Tell us something that’s true that almost nobody agrees with you on.

Isaac Balbin: The KISS principle will often lead to disaster.

People think that simplicity is required for everything and anything but simplicity is required in certain aspects of what’s going on, while other aspects can be as complicated as required. This is particularly true now that we’re living in an age where the level of computational complexity that can be handled by our machines is something that we never imagined when we were creating these systems of numbers that we use.

As an entrepreneur, what is the one thing you do over and over and recommend everyone else do?

Isaac Balbin: Questioning my assumptions on a regular basis.

What is one strategy that has helped you grow your business?

Isaac Balbin: Rather than focusing on the output, I focus on the people involved in things and try to always take into account the fact that they’re humans and not robots.

The usability of the things which are created inevitably ends up being much, much higher and everything else is easier as a result.

What is one failure you had as an entrepreneur, and how did you overcome it?

Isaac Balbin: I chose the wrong people to work with.

There was a deal I had where we were going to print trading cards for a person who wanted to enter the sports trading card market in Australia. At the time, the problem we had was that many suppliers out of China were demanding payment upfront. As a start-up, we didn’t have capital so the only way to be able to do this deal was for all the owners of the company to dip into their pockets and to be able to fund it. So we had a team meeting and collectively decided to do the deal.

The real issue that I had was that I was entirely relying on the expertise, experience, and execution of another person, and I hadn’t validated that beforehand. It all sounded like it would be fine but ultimately the customer decided that the way that the cards were collated in the packets wasn’t random enough and just decided not to pay us.

I’ll never forget the day I was told the news. I know exactly where I was – in my car near Church Street, Brighton in Melbourne. I was behind the main shopping strip. I went and found an isolated parking spot to park my car. I sat there with my head in my hands for a good hour, not knowing what to do or how to react.

And somehow, someway, I got out of it. Earlier on, I had de-risked the business by involving other people that had connections, many more connections than what I had. One of those people helped organize the sale of the whole business. In the end, we lost that money but we ultimately sold the business and so we were OK.

The big mistake that I made as the idiot engineer was to take my startup exit in shares instead of cash, and of course, I couldn’t sell those shares for a long time. It backfired because I did not do my due diligence on the people that were buying my company and so the share price just kept on dropping. That was my own failing for blindly trusting the other person in the deal who I believed was guarding and protecting me.

What is one business idea that you’re willing to give away to our readers?

Isaac Balbin: I think that there’s a tremendously exciting opportunity in the integration between board games and digital games. With technologies like NFC that bridge the divide between the physical world and the digital world, we can now start to see a whole new set of applications come to the table. Everyone loved Pokemon Go. It was like something they’d never seen before and all it used was the GPS location of a user and a local map from Google.

What if you had something that was an equivalent of a global scavenger hunt where people had to go to areas and find clues that are only accessible and readable if you scan an NFC tag using a special app? You could create unbelievable unique experiences which are truly global in nature and tremendously exciting. I would love to see that happen. If someone out there goes and builds it, let me know as I’m going to sign up.

What is the best $100 you recently spent? What and why?

Isaac Balbin: I was lucky enough to take ownership of a new puppy in my family and in exchange for getting that puppy, I bought my friend a gift that he wasn’t expecting that was worth exactly one hundred dollars. The impact that it made on him when he received it and found out that I was doing it for him is the best 100 bucks I’ve spent in the last little bit.

What is one piece of software or a web service that helps you be productive?

Isaac Balbin: I really like the Google duplication of Microsoft Excel, PowerPoint, and Word into their online shareable service. This has massively simplified working for me and with other people.

What is the one book that you recommend our community should read and why?

Isaac Balbin: “Thinking Fast and Slow” by Daniel Kahneman so that people can better understand why our world is the way that it is because it’s full of people and to understand why and how we can’t actually model how people behave. But there are things that we can understand that are neatly described in that book so that you can better understand how other people think. Ultimately, as an entrepreneur, in order to be successful, you need other people in some way, shape, or form as customers, partners, investors, etc.

What is your favorite quote?

Isaac Balbin: “Do not worry too much about your difficulties in mathematics, I can assure you that mine are still greater.” By Albert Einstein