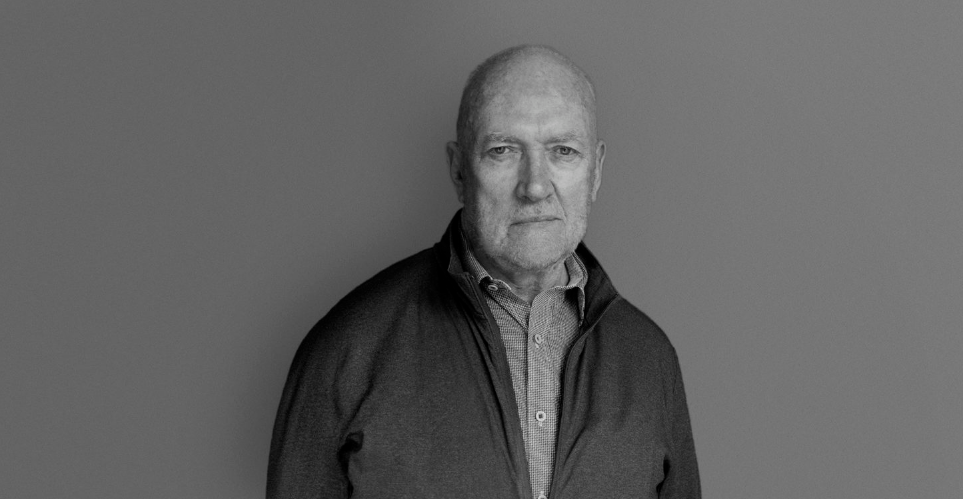 Mr. Scully, how much of the art that you create do you keep for yourself?

I keep a lot! And sometimes when I see certain paintings from my New York era, for example, come up at auction, I try to get them back. Sometimes I can’t, they go too high, but if I can do it, I like to get them back, they’re important to me. I have a very close relationship with them.

Do you still have your early pieces as well?

Sean Scully: Oh, yeah. I have them from all periods. I can’t hang much in my house though because I live in a kind of imitation French farmhouse that was actually built by Bill Murray, the actor. He lives down the road from me! He’s a nice guy. I like him. But he bought a bigger house, a movie star’s house. I don’t want a movie star’s house — I want an artist’s house. So there’s not many places for big paintings but I have them and I make exhibitions with them. I’m going to make a big exhibition in Budapest in September with a lot of the paintings that I own so I get to see them and I get to create with them. It’s a great privilege.

“The most positive thing that we’ve done is the art that we’ve made, that we leave from one age to another.”

Whereas a lot of artists sold their early work once they became famous in order to make some money.

Sean Scully: Well, then they’re stupid. I never made art to make money, it was never the main idea.

What was the main idea?

Sean Scully: To put something into the world that was positive. The most positive thing that we’ve done is the art that we’ve made, that we leave from one age to another, one generation to another. If we didn’t have our culture, what would we have? It would be a George Orwellian world. It’s an act of resistance as much as an act of creation.

Has there ever been a time where you didn’t create much?

Sean Scully: Yes, when my son died. I couldn’t work, I had kind of a nervous breakdown and it stopped me from creating. I’m telling you, when you lose your kid, it’s not a small thing. You can’t get over that. It’s simply impossible.

I’m sure that also influenced your art afterwards, no?

Sean Scully: Right, a lot of sorrow came in. My sense of color has always been tinged with melancholia and there’s nothing I can do about that. I can’t explain my sense of color, it’s very original. It’s is extremely distinctive. People think that my color was influenced by Rothko, but in Europe we had Bonnard and Vuillard and Kirchner and Matisse before the American painters. Of course, I fell in love with a few artists like Masaccio and Cimabue and Bonnard. By the time I got to America, my sense of color was already very prominent in me. I think it’s innate, you know, I paint the painting until it’s true.

What do you mean?

Sean Scully: Well, when it strikes me as being true, then the painting is done. There’s nothing else to say. When it’s true, it’s kind of bright but dark at the same time… It’s being pulled back but it’s always trying to rise up. And that’s exactly a picture of me! My milieu, the world in which I grew up was a world of violence and criminality. All my friends were either crooks or fighters or criminals. Or they did hard labor, like I did. I’m glad I did all that. It gave me a certain kind of confidence, you know, a physical confidence in the world.

Were you a crook, too?

Sean Scully: (Laughs) I was a very bad boy when I was at school because I didn’t have the kind of love that my son has. My father was very distant so I was extremely badly behaved; anything that required any work study, I wouldn’t do. I was too busy listening to rock ‘n roll and fighting, so I wouldn’t do any homework, I wouldn’t do any studying… History? Forget about it. When I ever took exams, I had to sit next to some other kid and copy his answers. But one day, I did an IQ test and of the 1500 boys in my school, I had the highest IQ!

What made you decide to turn from rock ‘n roll and fighting to art?

Sean Scully: One or two interesting people in my life turned me around from being a gangster to a poet. But I think the poet was always in me. I really come from abject poverty — we used to have fried bread three times a day. In Dublin we lived part of the time with the Gypsies, and when we moved to London, we were starving. My mother was a singer and she would win all these talent competitions. And that gave me this idea of stardom, you know?

“I was very intellectually curious at a certain point — I have boundless energy, I don’t know what it is.”

You were pursuing stardom?

Sean Scully: I wasn’t pursuing fame. If I’d wanted fame, I would’ve continued with rock ‘n roll! I didn’t do it to become a rock star. But I used to go to church with my granny, you know, and Catholicism is very visual, very sensual so it was kind of interesting. It was temporary Joan of Arc church, really just a shed with a tin roof. And when it rained it was fantastic, I loved it! It just gave me my sense of theater.

Sean Scully: They tried to stop me every step of the way! I’m the only person even today in my whole family who has been to university.

Despite that your first show apparently sold out immediately. Were you surprised by that?

Sean Scully: Right, these were my super grid paintings, which I invented. I have no explanation for that, it was very original painting. It was a huge struggle. I was very intellectually curious at a certain point, I mean I have boundless energy, I don’t know what it is. There’s something wrong with me, maybe I got electric shock or something from outer space but I have a tremendous amount of energy. And also an exaggerated sense of self-confidence! Where I cull this from, I’m not sure; it’s inexplicable to me.

Related Topics:InterviewInterviewsSean Scully
Up Next

Selling Toilet Paper and Paper Towels During the Pandemic. Interview with Joey Bergstein, the Chief Executive of Seventh Generation